Greg Poppleton brings you The Phantom Dancer, your non-stop mix of swing and jazz from live 1920s-60s radio and TV. On-air every week since 1985.

Hear The Phantom Dancer online from 12:04pm AEST Tuesday 6 October at https://2ser.com/phantom-dancer/ where you can also hear two years of archived shows. 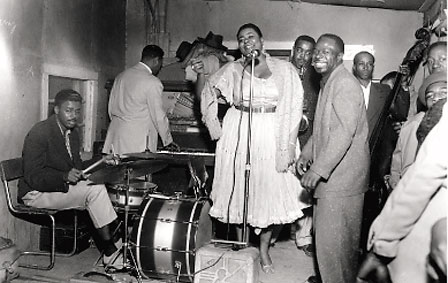 Mabel Louise Smith, stage name Big Maybelle, was an American R&B singer. She sang gospel as a child. In her teens she switched to rhythm and blues. She began her professional career with Dave Clark’s Memphis Band in 1936, and also toured with the all-female International Sweethearts of Rhythm. She then joined Christine Chatman‘s Orchestra with which she made her first recordings with Chatman in 1944. She recorded with Tiny Bradshaw‘s Orchestra from 1947 to 1950.

Her debut solo recordings, recorded as Mabel Smith, were for King Records in 1947. She was accompanied by Oran “Hot Lips” Page but had little commercial success.

Okeh Records signed her up in 1952. Okeh producer Fred Mendelsohn gave her the stage name ‘Big Maybelle’ because of her loud yet well-toned voice. Her first recording for Okeh, “Gabbin’ Blues”, which you’ll hear on this week’s Phantom Dancer, was hit number 3 on the Billboard R&B chart, and was followed up by “Way Back Home” and “My Country Man” in 1953.

In 1955, she recorded the song “Whole Lotta Shakin’ Goin On“, which you’ll also hear on this week’s Phantom Dancer, produced by up-and-coming producer Quincy Jones. Jerry Lee Lewis credited Smith’s record as being the inspiration for his cover.

Big Maybelle at Newport Jazz Festival with jazz band in 1958. Oh, what a difference a jazz band makes!