The Tuesday 28 January Phantom Dancer on radio and online has 1942-45 Django Reinhardt as your feature artist.

The Phantom Dancer with actor and 1920s-30s singer Greg Poppleton is your two hour non-stop mix of swing and jazz from live 1920s-60s radio.

You can hear The Phantom Dancer online now at https://2ser.com/phantom-dancer/ 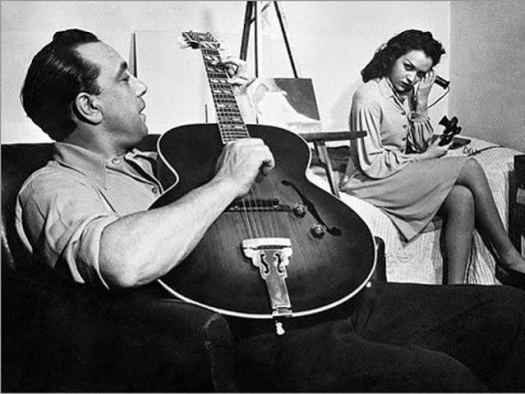 Belgian-born Romani-French jazz guitarist and composer, Django Reinhardt returned to Paris from London as soon as war broke out in Septemeber 1939.

Though he continued recording, Nazi-occupied France was a dangerous place for Reinhardt, as both a Romani and a jazz musician.

During the Holocaust an estimated 600,000 to 1.5 million Romani throughout Europe were eventually killed.

Additionally, the Nazi attitude towards jazz was antagonistic, labeling it ‘degenerate music’.

Official policy towards Jazz was much less strict in occupied France, with jazz music frequently played on both Radio France, the official station of Vichy France, and Radio Paris, controlled by the Germans.

Reinhardt was the most famous jazz musician in Europe at the time, working steadily during the early war years and earning a great deal of money, yet always under threat.

Reinhardt expanded his musical horizons during the war. By amplifying his guitar he was able to work in in large ensembles with horn sections. He also experimented with classical composition, writing a Mass for the Gypsies and a symphony. Since he did not read music, Reinhardt worked with an assistant to notate what he was improvising. His modernist piece Rhythm Futur was also intended to be acceptable to the Nazis.

One of his songs, Nuages, became an unofficial anthem in Paris to signify hope for liberation. The single sold over 100,000 copies.

In 1943, Reinhardt married Sophie “Naguine” Ziegler in Salbris. They had a son, Babik Reinhardt, who later became a respected guitarist in his own right.

Django survived the war to be later killed by tobacco companies. Their poison killed him by brain haemorrage in 1953

Here is The Phantom Dancer Video of the Week, Django Reinhardt playing Komm Zuerruck with Stephane Grapelli and the Hot Club of France in an American short from early 1939.