This week’s 11 February Phantom Dancer mix of swing of jazz from live 1920s-60s radio, on radio and online, has Fletcher Henderson from 1940s-50s radio as feature artist.

Fletcher Henderson studied chemistry and maths. When he turned to music he changed jazz forever, introducing swing arrangements in the 1920s, bring Louis Armstrong to NYC and making music literacy popular. Hear him on 1935-50 radio on this week’s Phantom Dancer with Greg Poppleton.

The Phantom Dancer with actor and 1920s-30s singer Greg Poppleton can be heard online now at https://2ser.com/phantom-dancer/

A gifted pianist from the age of 6, whose father made him practice for hours every day, Fletcher Henderson, studied chemistry and mathematics and worked in a laboratory before turning to music.

Henderson, along with Don Redman, established the formula for swing music. The two broke the orchestra into sections (woodwind section, brass section, rhythm section). These sections worked together to create a unique sound. Sometimes, the sections would play in call-and-response style. At other times one section would play supporting riffs behind the other. Swing, its popularity spanning over a decade, was the most fashionable form of jazz ever in the United States. 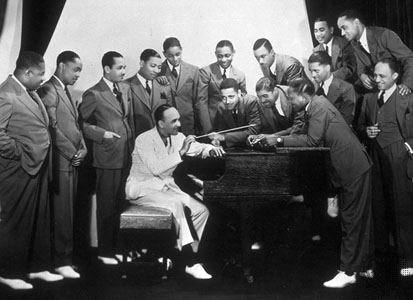 The immaculately dressed Fletcher Henderson Orchestra in 1936, while Henderson was also arranging for Benny Goodman

Henderson was also responsible for bringing Louis Armstrong from Chicago to New York in October 1924, thus flipping the focal point of jazz in the history of the United States. Armstrong left the band in November 1925 and returned to Chicago.

Henderson also played a key role in bringing improvisatory jazz styles from New Orleans and other areas of the country to New York, where they merged with a dance-band tradition that relied heavily on arrangements written out in musical notation. 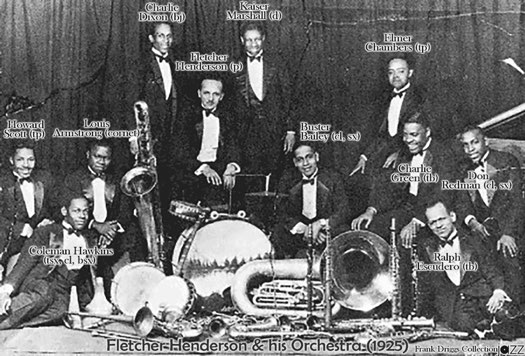 Henderson differed from other musicians in his time. He made the idea of playing jazz popular to ambitious, young, black musicians. He made it financially stable and a way to seize cultural power during the time.

Henderson cared for the appearance of the band. He was all for making an impact on the era. Henderson would see to it that each member had a clean-shaven face, a tuxedo, and polished shoes. It was recorded that he would do this before every performance, especially ones in predominantly white communities.

Henderson created a band that was capable of playing dance music and complex arrangements. Louis Metcalf said, “The sight of Fletcher Henderson’s men playing behind music stands brought on a learning-to-read-music kick in Harlem which hadn’t cared before it. There were two years of real concentration. Everybody greeted you with ‘How’s studying?’

Here is The Phantom Dancer Video of the Week, the Fletcher Henderson Ork playing ‘You Go To My Head’ live over WLS NBC Blue, Grand Terrace Ballroom, Chicago, in 1938. Enjoy!