The Phantom Dancer is produced and presented by 1920s-30s singer and actor Greg Poppleton. The show has been on-air over 107.3 2SER Sydney since 1985.

You can hear it online from 12:04pm AEST Tuesday 30 June at https://2ser.com/phantom-dancer/ 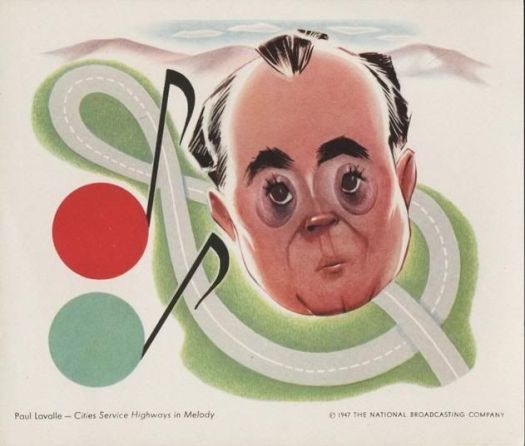 Paul Laval from 1938 and Paul Lavalle after the 1940s was the stagename of Joseph Usifer. He made one record in 1938, a sophisticated swing arrangement in the style of Raymond Scott in 1938.

Lavalle won a scholarship to Juilliard and was a student of composition of Joseph Schillinger. He played in many 1930s bands, including one in Havana, Cuba. In 1933 he became an arranger and clarinetist in the NBC house orchestra. His composition Symphonic Rhumba (1939), was broadcast by the NBC Symphony Orchestra, conducted by Leopold Stokowski, on December 6, 1942.

On radio he collaborated with Victor Borge, Mario Lanza, Robert Merrill and Dinah Shore. In November 1944, his jazz composition ‘Always’ made it to number 29 on the top 40 charts.

Lavalle was selected over several applicants to become the conductor of the Band of America in 1948. They performed on the weekly radio program Cities Service Concerts on NBC Radio for eight years and almost 400 programs. Each program began with the introduction: “Forty-eight states… 48 stars… 48 men marching down the main street of everybody’s hometown! Here comes the Cities Service Band of America, conducted by Paul Lavalle!”

In 1949, Lavalle and the band became one of the first musical groups to appear weekly on television.

On May 18, 1961, Paul Lavalle and the Greatest Band in America joined singer Kay Armen in a 30-minute episode of the ABC-TV series ‘Music For a Spring Night’ entitled ‘Concert in the Park.’ Beginning in 1964, the Band of America toured extensively and also became the official band of the 1964 New York World’s Fair, an engagement that lasted into 1965.

Lavalle guest conducted many orchestras, including the ABC Symphony, CBS Symphony, NBC Symphony Orchestra, New York Philharmonic and Rochester Philharmonic Orchestra. In 1966 he became the conductor for the Radio City Music Hall Symphony Orchestra, and he returned two years later to serve as director of music and as principal conductor until 1975. In 1981 he began conducting the Wilton, Connecticut, Chamber Orchestra.

Your Phantom Dancer Video of the Week is Paul Lavalle’s Symphonic Rhumba (1939), broadcast by the NBC Symphony Orchestra, conducted by Leopold Stokowski, on December 6, 1942…