Greg Poppleton has been bringing you The Phantom Dancer, your non-stop mix of swing and jazz from live 1920s-60s radio and TV, each week since 1985.

Hear The Phantom Dancer online from 12:04pm AEST Tuesday 15 September at https://2ser.com/phantom-dancer/ where you can also hear two years of archived shows. 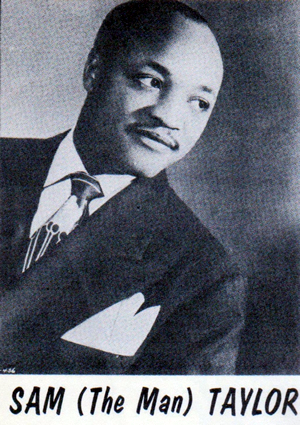 Taylor played the saxophone solo on Turner’s “Shake, Rattle and Roll”. He also played on “Harlem Nocturne”; on “Money Honey”, recorded by Clyde McPhatter and the Drifters in 1953; and on “Sh-Boom” by the Chords.

During the 1960s, he led a five-piece band, the Blues Chasers. In the 1970s, he frequently played and recorded in Japan.

Sam ‘The Man’ Taylor’s hit 1955 recording on the 1930s jazz standard, Harlem Nocturne. The song was written by Earle Hagen when he was a teenager! He later gave us some of the greatest TV themes ever: “Andy Griffith Show”, “Dick Van Dyke Show”, “Gomer Pyle USMC”, “Danny Thomas Show”, “That Girl”, “I Spy”, “Mod Squad”