Specifically, we’ll hear three examples from 1929 – 45 radio of music and spoken word aimed at the teenager. You’ll even hear the massed voices of teenagers in a Frank Sinatra broadcast.

The Phantom Dancer with actor and 1920s-30s singer Greg Poppleton can be heard online now at https://2ser.com/phantom-dancer/

‘Harold Teen’ is a 1929 song celebrating the popular comic book character of the same name first published in 1919, written and drawn by Carl Ed (pronounced “eed”).

Asked in the late 1930s why he had started the strip, Ed answered, “Twenty years ago, there was no comic strip on adolescence. I thought every well-balanced comic sheet should have one.” 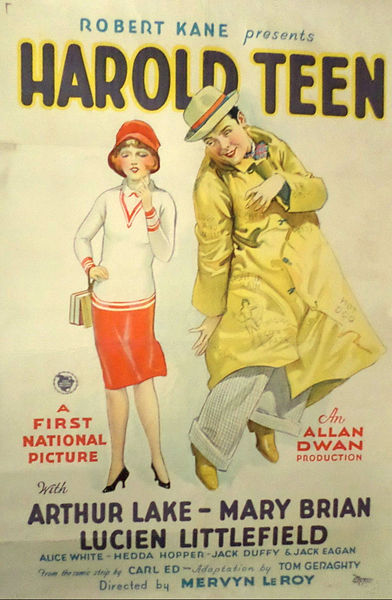 The success of the strip led to toys, figurines, pins and other products.

Carl Ed received writing credit for both film adaptations of Harold Teen. Tap dancer Hal Le Roy had the title role in the 1934 movie musical Harold Teen. In the 1928 silent version, Harold was portrayed by Arthur Lake, best known for his many performances as Dagwood Bumstead.

There was also a Harold Teen radio show mid-day on Saturdays on the Tribune radio station WGN in Chicago. It was mostly a DJ show with Harold and his buddy Shad spinning the latest hits.

Kansas City jazz band pianist Joe Sanders wrote a song about the “Don Juan of comic strip fame”, describing him as a “human love machine” and as “romance personified”. A performance by the Coon-Sanders Original Nighthawk Orchestra can be heard in the March 1, 1929, episode of the Maytag Frolics radio program on this week’s Phantom Dancer

Bobby soxer is term for a very zealous fan of 1940s traditional pop music, in particular that of singer Frank Sinatra. We’ll hear them screaming after a Frank song in this week’s Phantom Dancer.

Bobby soxers were usually teenage girls in high schools and colleges, who got their name from the bobby socks that they wore.

Teenage actress Shirley Temple played a stereotypical Bobby socker in the film The Bachelor and the Bobby-Soxer (1947).

Turns out, as you’ll hear announced on this week’s Phantom Dancer, that Eddie Condon’s dxieland jazz was ‘OK with teenage USA’.  This reported wisdom came from a newly published magazine, Seventeen, the first magazine aimed at 13-17 year old girls that treated them like adults so they could be sold to.

Helen Valentine (1893-1986) was the founder and editor in chief of Seventeen.

In 1944, while serving as promotion director for Mademoiselle magazine at Walter Annenberg’s Triangle Publications, she was asked by Annenberg to help revive a movie magazine.

Although the concept of “teenager” as a distinct demographic segment of the population was a relatively new idea at that time, Valentine instead proposed a magazine for teen-age girls. Noticing the wide popularity of a King Features Syndicate comic strip by cartoonist Hilda Terry that focused on the trials and tribulations of a typical teenager’s life entitled Teena which began running in July 1944, Valentine convinced Annenberg that teenage girls needed a magazine of their own and that the then unserved demographic had the potential to become an important and lucrative new consumer market segment stating that “It was time to treat children as adults.”

The magazine was launched in September 1944 and within a year, Seventeen had a circulation of a million. Seventeen is credited with creating a teen market for clothing manufacturers and other industries.

The Phantom Dancer Video of the Week  is a short clip from the documentary, Teenage, featuring Bobby Soxers. Enjoy!