The Boswell Sisters, 1920s-30s vocal group, is this week’s Phantom Dancer feature of the week with a set of radio transcriptions they made in 1930.

The Phantom Dancer is produced and presented by 1920s-30s singer and actor Greg Poppleton. The show has been on-air over 107.3 2SER Sydney since 1985.

You can hear it online from 12:04pm AEST Tuesday 12 June at https://2ser.com/phantom-dancer/ 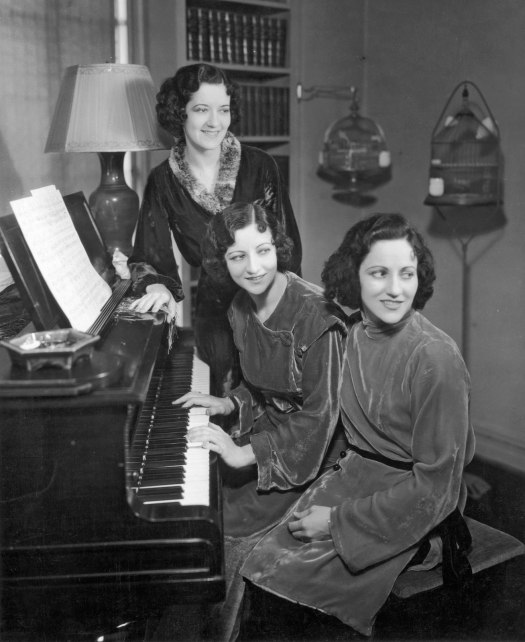 They were yet another 1920s – 30s jazz stand-out who had classical backgrounds, having studied classical piano, cello, and violin respectively.

“We studied classical music . . . and were being prepared for the stage and a concert tour throughout the United States, but the saxophone got us,” Martha told the Shreveport Times in 1925.

The sisters’ older brother Clyde, also a classically trained musician, was the one who first got his sisters into jazz. He introduced them to cornetist Emmett Louis Hardy, who shaped the sisters’ knowledge of jazz harmony, syncopation and improvisation. Vet took up the banjo, Connie took up saxophone and Martha continued playing the piano. Hardy died of tuberculosis at age 22. Clyde died from flu at 18.

The trio played concerts and vaudeville in the early 1920s, gradually replacing their classical repertoire with jazz. They first recorded in 1925 and after arriving in Los Angeles in 1929 sang on radio shows and recorded film music.

You’ll hear a song from one of their 1930 Hollywood Continental Broadcasting Corporation transcriptions on The Phantom Dancer today.

They had 20 hits in this time, appeared on film and experimental TV, toured Europe twice, and even made a recording released only in Australia. They influenced the Andrew Sisters in the US, the Trio Lescano in Italy, Allanovy Sestry in Czechoslovakia and the Harmony Sisters in Finland. Connie Boswell’s solo recordings were a major influence on Ella Fitzgerald.

Vet’s daughter and granddaughter published the book, The Boswell Legacy, in 2014.

And your Phantom Dancer video of the week is the Isham Jones music video, Underneath The Broadway Moon. Isham Jones was a bandleader and composer of many jazz songs including ‘It Had To Be You.’ Enjoy…